Everyone has a role to play to make our community climate-ready. Help spread the word about climate change adaptation.

Scientists across the world agree that the Earth’s climate is changing and the impacts of climate change is already being felt in cities across Canada including Thunder Bay. Local experiences of climate change impacts show that these can incur high costs to the community as a whole. Early adaptation action to reduce climate risk and increase resilience is necessary.

Scientific evidence shows that the climate is changing. The Intergovernmental Panel on Climate Change is an authoritative body composed of hundreds of scientists that assess scientific information available on climate change. Their Fifth Assessment was the most comprehensive yet and concludes that “warming of the climate system is unequivocal, and since the 1950s, many of the observed changes are unprecedented over decades to millennia. The atmosphere and ocean have warmed, the amount of snow and ice have diminished, and sea levels have risen”.

The overwhelming majority of scientists agree this is due to rising concentrations of heat-trapping greenhouse gases in the atmosphere caused by human activities, stating that “human influence on the climate system is clear, and recent anthropogenic emissions of greenhouse gases are the highest in history”. They have concluded that some level of climate change is inevitable even if action is taken to reduce greenhouse gas emissions.

Annual climate data shows noticeable temperature highs and lows, but over longer periods of time there has been a discernible warming trend across the globe. The global average temperature over the first decade of the 21st century was significantly warmer than any preceding decade on record over the past 160 years. With the exception of 1998, the 10 warmest years on record have happened since the year 2000.

Since warmer air holds more moisture than cooler air, this additional moisture provides “fuel” for extreme events.  The amount of water vapour in the atmosphere has already increased by roughly 5% since the 1950s  and scientists predict that the main way in which climate change is likely to affect societies is through extreme weather events.

Just as weather and climate varies around the world, the effects of climate change will also vary dramatically from location to location.

The impacts of climate change in the Great Lakes basin, on Lake Superior, and in Ontario are already being felt. Lake Superior has been recognized as one of the most rapidly warming lakes in the world as summer lake surface temperatures have risen 2.5°C between 1979 and 2006. It is predicted that a number of climatic changes will impact Lake Superior, including longer water renewal times, increased water temperatures, longer ice-free seasons, variations in lake-water chemistry, lake water level changes, limited ranges of coastal wetlands, changes in forest habitat, shorelines that are more susceptible to erosion and damage, release of toxic sediments, decreased lake productivity, and decrease in amounts of cold-water fish.

Extreme weather events including prolonged heat waves, torrential rainstorms, windstorms, and drought have increased throughout Ontario in recent years. The frequency of very hot days (above 32°C) is expected to increase by 2.4-fold in Ontario by the late 21st century. These extreme heat days, combined with drier summers and generally warmer weather, will add to the frequency of large fire years and by the end of the century, the average area burned in the boreal shield is expected to increase by 64 – 92%.

Thunder Bay has been impacted by climate change in recent years, including the hail and wind storms of 2011, the heavy rains of 2012, extreme cold temperatures in 2013-2015, and severe storms and heat waves in 2015. Climate change is projected to continue to impact Thunder Bay as shown in Table 2.

Climate projections for the Thunder Bay region include an increase in extreme weather, temperature fluctuations, frequent high intensity rainfall events, and drought conditions in the summer. Between 1948 and 2008, the average annual temperature in Northwestern Ontario has already increased by 1.4°C and scientists project that by 2050 the annual average temperature could increase by 2.7°C and 4.6°C by 2080.

Precipitation patterns will also change in the coming decades, principally through greater uncertainty. It is believed that annual precipitation will increase but this will likely be predominantly during the winter and spring months in the form of snow and freezing rain. Although Thunder Bay might experience 6.5% more precipitation by 2050 and 11% more by 2080, summer months will likely see a decrease in precipitation of 1.4% by 2050 and of 0.9% by 2080.

The Earth’s climate is determined by its ability to both trap and reflect heat from the sun and to circulate it through the atmosphere and the oceans. Greenhouse gases such as carbon dioxide (CO2) and methane (CH4) are fundamental to this process. An increase in greenhouse gases alters the Earth’s ability to naturally regulate the climate. When this capacity is altered, the Earth’s climate can change. The term “climate change” refers to a change in the average state of the climate.

Climate change impacts have the potential to affect all City departments and service delivery. This is why municipal governments have a unique interest and opportunity in planning to adapt to climate change. Understanding the impacts and local vulnerability to climate change will determine how to address projected changes and reduce the risks they pose to our environment, lifestyle, economy, governance, and overall quality of life. These impacts are shown in Table 3 as they relate to the four pillars of the City’s 2015-2018 Corporate Strategic Plan.

Hundreds of potential climate change impacts were considered for the City of Thunder Bay and ranked according to their potential for risk to the Corporation. A total of nine priority impacts were identified through a three-step consultation process including a general importance assessment, a vulnerability assessment, and a risk assessment. The outcomes of this process is summarized in Appendix D and detailed in the Thunder Bay Climate Adaptation Strategy: Risk & Vulnerability Assessments Results. Of the nine priority impacts, eight have to do with projected increase in intensity and frequency of extreme weather events (EX) and one is related to projected increases in temperature (TEMP)

Table 2: Summary of projected changes in climate for Thunder Bay.

Table 3: Examples of how the priority impacts have the potential to affect the four pillars of the City’s 2015-2018 Corporate Strategic Plan.

Priority Impacts for the City of Thunder Bay

Priority Impacts for the City of Thunder Bay

The risks associated with climate change to economies are real and imminent. Early action to address climate risk and to overcome barriers to implementing adaptation measures should be a priority for decision-makers.

Through proactive action, the City can achieve its climate adaptation goals and simultaneously realize a host of community benefits, including economic development, community health and wellness, and the continued development of a sustainable and liveable City over the decades to come. In fact, research shows that climate adaptation is most cost-effective when solutions work to serve multiple benefactors.

Cities are increasingly recognized as critical to progress in adaptation given their roles in scaling up adaptation of communities, households, and civil society, and in managing risk information and financing. Since local governments invest in capital projects and programs that are expected to serve the City over many decades, decisions can be made today to reduce risk, take advantage of opportunities, and avoid high costs associated with:

The increase in severity and frequency of extreme weather events is perhaps the most costly of climate change impacts. Figure 1 shows a clear rising trend of insurable catastrophic losses in Canada from 1983-2013.  While annual insurance losses in Canada due to extreme weather events have previously been “stable” around $400 million a year from 1938-2008, these costs have surpassed $1 billion in insurable damages from 2008-2013 excluding damages from residential overland flooding. In the absence of adaptation, estimates indicate that climate change may cost the people of Canada approximately $5 billion in insurable losses per year by 2020, and between $21 and $43 billion by 2050. 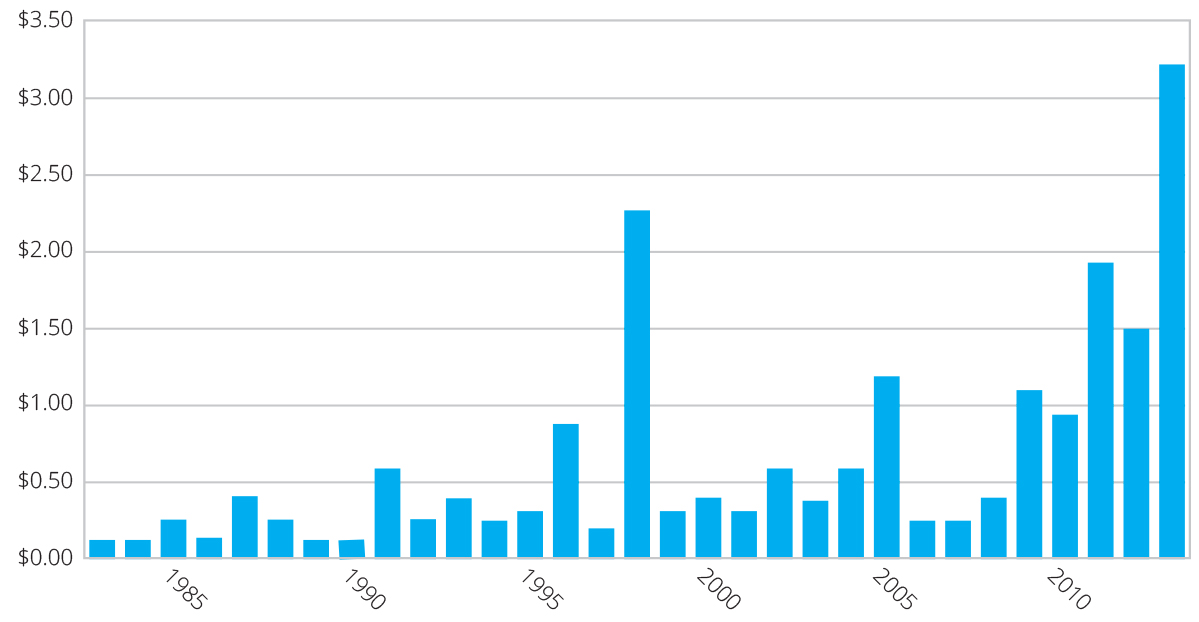 The hail and wind storms of 2011, the heavy rains of 2012, and extreme cold temperatures experienced in 2013 and 2014 are all examples of how climate change has impacted Thunder Bay in recent years. 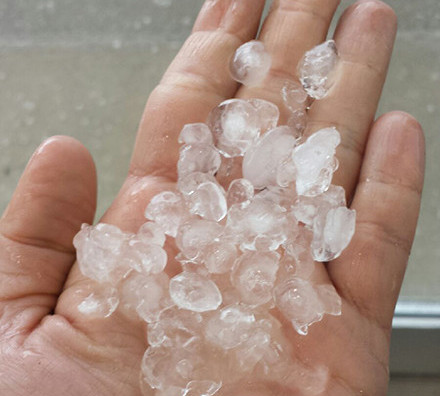 Taking proactive adaptation measures can avoid these high costs and bring long term cost-savings to all levels of government. Several studies have found that local governments can save money by incorporating adaptation actions in regular infrastructure upgrading cycles since the benefits outweigh the costs. Some estimates claim that every dollar invested in adaptation now will yield anywhere from $9-$38 worth of avoided damages in the future.43 A recent study from the University of Waterloo found that in some cases, building new infrastructure that is adapted to climate change for its lifecycle will only add 0-5% to construction costs.

In a cost benefit analysis completed by the National Round Table on the Environment and the Economy, implementing proactive adaptation actions versus dealing with the consequences when they occur was found to be a cost effective way of dealing with many climate change impacts. The Economics of Climate Adaptation Working Group also came to the conclusion that “well-targeted early investment to improve climate resilience is cheaper and more effective for communities than complex disaster relief efforts after the event”.

Adaptation also presents potential economic opportunities aside from long-term cost savings and returns on investments. In many cases, adaptation measures are also effective steps to strengthen economic development and attract investment. Economic opportunities may be most evident in the tourism and agriculture sectors, which both stand to potentially benefit from longer summers.

Potential Opportunities for the City of Thunder Bay

Potential Opportunities for the City of Thunder Bay

Explore the next section